It's been obvious since the convention that Ted Cruz will eventually support Donald Trump.

In Ted Cruz is Nixon and Is Ted Cruz the new Nixon?, friendly conservative pundits Rich Lowry and Matt Lewis nailed it: Ted Cruz is Nixon. He's a hyper-ambitious politician who calculates the politics of every move and position.

The #CruzCrew twitterverse thinks that Cruz's current stand against Trump is principled. Maybe it is, but there's no way Cruz will maintain opposition to Trump.

Ted Cruz is a calculating politician, and his current position is untenable.

Ted Cruz's convention speech put him in a bad long-term position, though he didn't seem to realize just how bad. He went on national TV and said "vote your conscience" -- a phrase that has a very specific meaning in politics: it's okay to vote against your party.

Cruz and his advisors soon realized they'd miscalculated by the intensity and length of the backlash. They lost their biggest 2016 donor, probably permanently.

It's impossible to overestimate the level of antipathy that the average Republican voter has for Hillary Clinton. It's so strong that Republicans are willing to back a liberal New York Democrat like Donald Trump if it keeps Hillary out of the White House.

It's hard to understand how 2012's Ted Cruz went from emotionally shouting at David Dewhurst "How dare you question my patriotism?" during a debate [because of a mail piece written by Jeff Roe for Dewhurst] to becoming 2016's Ted Cruz: the presidential candidate who deliberately chose the same tactics and reputation for dirty dealing.

Much of Jeff Roe's strategy has been awful for Cruz, but great for Jeff Roe. The Cruz 2016 strategy never had any chance of winning the nomination, but it was a great strategy to get second place.

You know who benefits from Ted Cruz finishing "second?" Not Ted, just Jeff.

Roe has always been against the "vote your conscience" line, and he seems to always eventually get Cruz to agree with him. He'll get it this time too, eventually.

4. "Vote your conscience" has already run its course.

Ted Cruz needed a big stand to make people forget how he was Trump's biggest supporter when it mattered. There was almost a year of this:

The whole convention speech was an attempt at getting voters to forget that Ted Cruz bragged about his campaign strategy of boosting Trump because he thought it would help his chances. 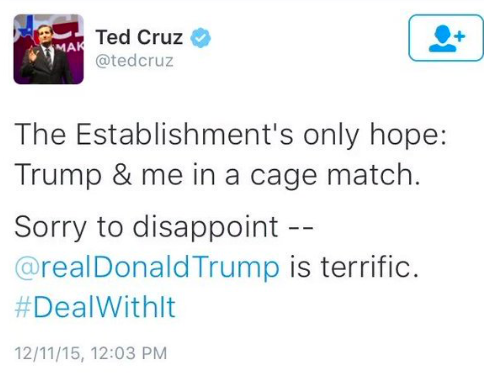 In fact, after the primaries Jeff Roe even accidentally admitted how Cruz's entire strategy was to boost Trump because Cruz couldn't beat anyone else one-on-one. "Our strategy required us to be head-to-head against [Trump]."

The whole "vote your conscience" kerfuffle has now served its calculated purpose.

5. Cruz is going to have to tell people he voted against Hillary Clinton if he wants to win re-election in 2018.

If Cruz doesn't flip, the ads against him write themselves in the 2018 GOP primary. You show some of the endless footage of Cruz and Trump as best friends forever, then you show Cruz refusing to support Trump.

"Can you trust a politician who can't even stand against Hillary Clinton?" That's a winning message against Ted Cruz for anyone if Hillary is president, because the right's intensity against Hillary will only intensify if she's in the Oval Office.

If Cruz is going to flip-flop on Trump (again!), he may as well do it now. Cruz has literally been all over the map on Trump. Surely his supporters can swallow one more change?

It's possible that he doesn't tell us until after November that he voted for Trump. But I'd bet he does it sooner rather than later.

I doubt Ted Cruz comes out with a full-throated backing of Trump. It's much more likely that he just decides to flip-flop by saying that "conscience dictates that I vote against Hillary."

If history serves, he'll then make the argument that his flip-flop is 100% consistent with what he's always said.