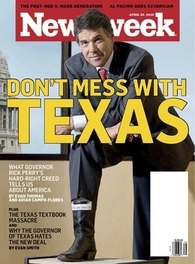 I've had the Newsweek stories open in my browser for the last week or so, but haven't really felt like there was much to comment on. Here's a blip from the accompanying interview:

ES:You've been in public office for more than 25 years, and you are the longest-serving governor in the history of the state. Yet you've managed to run for the last few months as an outsider.
Rick Perry: I disagree that I paint myself as somehow outside. Now, I did run a campaign as us—Texas—versus Washington. Washington is the center of bad public policy in most people's opinion and has been for some time—not just in this current administration, though this administration is carrying it to new levels. Do you want Texas to be run the way it has been run, with a Texas-centric philosophy, or do you want this person from Washington, D.C., to come down here and use Washington-style policies and philosophies? I think the people sent a pretty strong message.

ES: A couple of different times in this conversation, you've alluded to having to battle problems that predated the Obama administration. I can't help but notice that you have a bust of Ronald Reagan, whom you consider to be a great president, over your shoulder. I don't see a bust anywhere of George W. Bush.
Rick Perry: Um, I don't know whether George's gotten any busts done yet.

So now, I, Evan, am commenting on Evan's interview that accompanies Evan's cover story. It's an Evan world out there.