Is Trump likely to lose Texas? No, because not even Trump is "likely" to do that horribly, but it is absolutely possible. 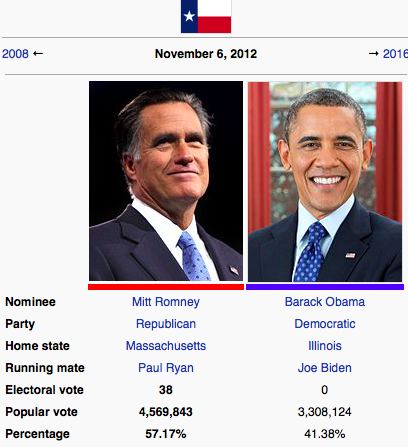 Hillary is leading by about 7% right now, so that suggests we're looking at a 12% margin in Texas at the moment. While Hillary is the 2nd least liked presidential nominee of all time, she's facing off against the least liked presidential nominee. Ever. Given the massive financial and enthusiasm deficit on the Republican side, I'd say the more-likely-than-any-other-individual-scenario is that Hillary ends up winning by more like 10 or 12, a la with 55 or 56%.

But our demographic makeup is more Latino than the national average, and Trump will definitely run behind.
Latinos are only about 10% of voters nationwide, but with Trump on the ballot, Latinos will likely be close to 20% of the Texas electorate. A normal GOP presidential candidate gets about 35% of the Texas Latino vote, and a good one like George W Bush can get close to 50%. Trump will be lucky to get 15% of it -- anecdotal evidence suggests many of those folks can't vote for Hillary but certainly some will.

Depending on that number, we could be anywhere from Trump +2 to +8.

If Hillary gets to around +11% nationally over Trump, then Texas should see some polling that is in the margin of error.
Whether you think that is possible depends on how likely Trump is to be able to balance his appeals to the white working class voters who don't normally vote versus many of the conservative-leaning suburban white women (who do vote!) who are put off by Trump's bigotry and misogyny.

It also remains to be seen whether the right can put together any sort of fundraising apparatus for GOTV without a cooperative or palatable figure at the top of the ticket -- if not, you'd think that adds a percent of two to where the polls peg Hillary.

Lots of X factors, but on balance they probably weigh against Trump.
Hey, Hillary could get indicted. Or Russian hackers could release all the emails that she recklessly put on the internet in order to keep her emails shielded from FOIA laws.

One final point: in the final days of the campaign, Trump could do anything. If he's losing, he's unlikely to simply run the race out hard to keep the margin of defeat low so that Republicans save the House majority. He doesn't care -- he hasn't even pretended to be a Republican for more than a few years! He consistently referred to the Republican Party as "them" or "you" even during the primary. That sort of X factor definitely increases the possibility that Trump somehow does the unthinkable and loses Texas.

What will happen down the ballot is anyone's guess.